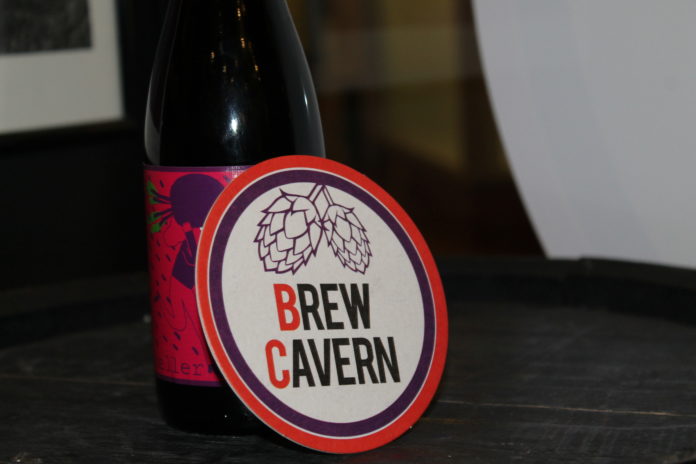 Beer. No matter where you are in the world if there is one thing any bar you set foot inside of will have, it’s beer. Craft beer has recently found popularity among many for its flavours and homage to microbreweries. To find out more about the surge behind craft beer, Mathias Balslev sat down with a man who certainly knows his brews.

Just off Market Square at the bottom of the arcade Flying Horse Walk, sits a man in a room surrounded by craft beer.

His name is Matthew Hinton and he is the owner of Brew Cavern, the city centre’s very own craft beer specialists.

Matthew found his passion for beer while living in Sheffield when a friend introduced him to the owner of a similar type of store there.

He said: “It was a real inspiration to me and when I moved back two years ago, I knew that I wanted to work for myself and I saw an opportunity to do so.

“When we opened we were the first ones to do it this way and we still are.”

The shop specialises in modern craft beer and currently has beer from ten different nations in stock.

Even though his shop is advertised as a craft beer shop, the definition of craft beer is still a difficult task.

“There is no real definition of craft beer, the Americans have one and I think it has been borrowed by other countries including the UK.

“We use it for simplicity, a lot of people come in asking for craft beer and we then try to guide them by understanding their tastes and how they like their beer.”

The shop currently features a selection of beers from countries such as the UK, Denmark, Belgium, USA, New Zealand and Australia.

Matthew said: “I think people have always found beer interesting, that ultimately saved flavoursome beer because more independents starting brewing their own and did not let macro-breweries ruin beer, which was the way it was going in the early seventies.”

Craft beer originally came about in the US but has since made its way over to Europe and now British microbreweries are some of the leading brewers in the world.

That interest for craft beer in the UK has also been noticeable to shop owner Matthew who said: “A lot of people come in wanting to buy locally produced beer because I think many people are understanding and reading between the lines realising that shopping locally produced helps local business.

“People like the idea of buying something that is brewed on a much smaller scale and budget.”

Brew Cavern currently offer 20 local Nottingham craft beers from five different breweries but hope that number will increase in the near future.

“There a lot of others from around here but we keep the ones we know sell well and unfortunately most do not bottle their beer so we hope that they will do soon.”

For anyone keen on getting a taste of craft beer Matthew does have some tips for where to start.

“Our most popular beer is Gamma Ray by Beavertown, an Indian Pale Ale from a London brewery.”

Other popular choices at the Brew Cavern include the Huddersfield brewery Magic Rock’s range of craft beers all known for their tropical flavours.

Yellow Belly by Buxton was created as part of the Rainbow Project where seven British breweries collaborate with seven international brewers each year.

It’s a firm favourite with his customers.

“The beers in the Rainbow Project are usually quite experimental and Yellow Belly is a stout with peanut and biscuit giving it a nutty aroma and taste.”

Yellow Belly is not the only craft beer that combines unusual tastes for a unique flavour.

One of the microbreweries famous for their wide range of experimental flavours is Wild Beer whose tastes include a beer called At The Sea with lobster, cockles, seaweed, sea salt and sea herbs.

Taste is not the only thing microbreweries experiment with, many of them are known for their unique bottle designs.

Matthew said: “Microbrewers want a contemporary look and many of them focus less on tradition because they are modern breweries so they do not feel they need to have connection to the history of anything.

“Kernel Brewery is a good example of that, their maker originally brewed at home so he would just whack a label on but it looks really nice and has now become iconic because each batch produced is different.”

When it comes to brewing techniques however many modern brewers have reverted back to traditional methods more like those of the 1900’s.

Matthew feels the fierce competition has led microbreweries staying innovative with their taste and their designs.

“With so much good beer out there it is important to stand out, people collect the bottles now and the design is part of the experience.”

For Matthew, Nottingham has been a great city to share his passion with and hopes to expand his own business into a bar in the near future.

He said: “There is a great group of passionate people here who loved craft beer and the interest is growing, which is exciting.

“It is a good time to be in the beer business, as long as the microbreweries are innovative and produce exciting stuff that interest is going to keep growing.”