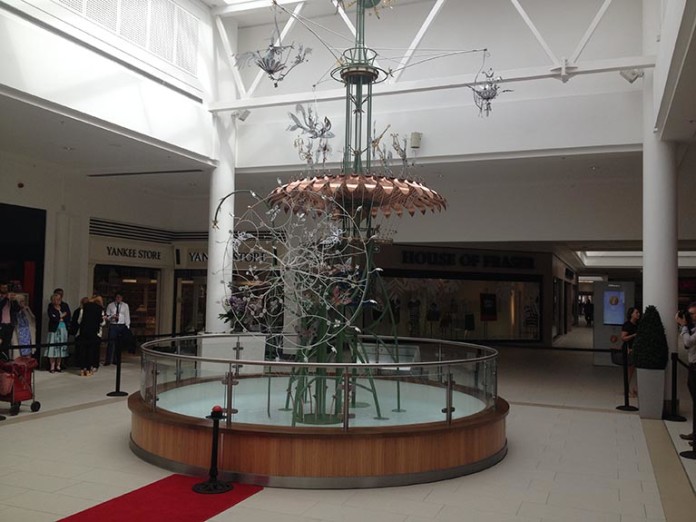 The Emett Clock, or the Victoria Centre fountain as it is also known, has been unveiled in its new location. The people of Nottingham have been admiring their new and improved landmark.

The clock had previously been located between the Next clothes store and the Boots cosmetics store on the ground floor in the Victoria centre but has now been moved to just outside the Disney store on the upper floor and in general, people feel this is a good thing.

Sally and Ann Hickling were very glad to see the clock restored and in a new location. They were among the first people to arrive for the unveiling.

We joined the campaign online for it to come back to Nottingham because it is iconic.

Sally Hickling did wonder at first whether the move was necessary but as soon as she saw it, she was sold on the fountain’s new home.

She said: “At first I thought it would be a shame to move it because that was where Rowland Emett envisaged it.”

“Looking at it now, I do think it looks nice with all the natural light coming from the roof.”

The clock was designed by inventor Frederick Rowland Emett has been part of Nottingham since 1973.

One of the passers-by, Duncan Gisby, was very passionate about the clock returning and admitted to missing it while it was away.

Duncan has built up many memories of the clock over the years, he said: “As a child, whenever it played at 10 or at half past it always put on a little concert for us and it’s music is just like being in heaven.”

“It’s an honour to have it back here, it really is.”

It has long been a tradition in Nottingham to throw coins into the water at the base of the clock. Nigel Wheatley, General Manager for the Victoria Centre revealed that all the money raised by the fountain would be going to the ‘When You Wish Upon A Star’ charity who are based on Valley Road, Nottingham.

It’s wonderful that we are going to be part of the clock for the next year.

Maggie Falconer, Regional Fundraiser, When You Wish Upon A Star

To learn more about the man behind the Emett clock restoration, click here