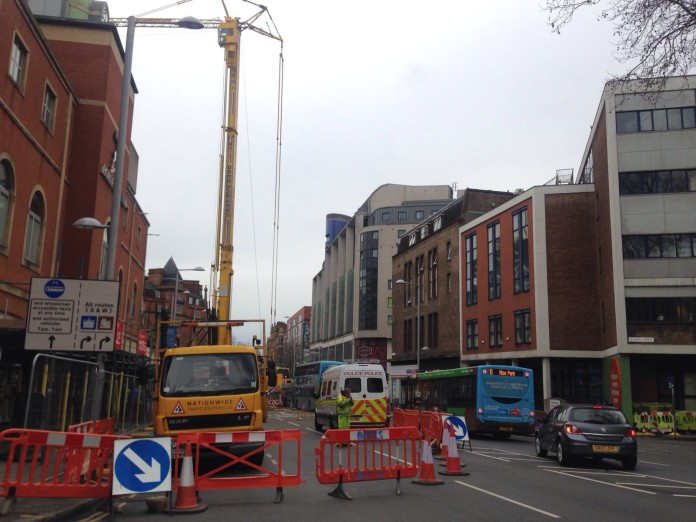 A crane causing up delays of up to an hour on a major Nottingham road is expected to stay until Thursday.

Two lanes are shut on Mansfield Road to allow the crane to reach works on the Victoria Centre roof.

Bus services have also been badly affected with NCT saying some services are being delayed by as much as an hour at rush-hour.

Drivers are being advised to avoid the area completely if possible and temporary lights connected to the closure are believed to be the cause of the problem.

Twitter users have been posting pictures of the culprit

NCT Buses warned of ‘severe’ delays to some of its services again today and said the restrictions are due to be in place until late Thursday.

Google map: The hot spots to avoid around the crane on Mansfield Road

In a statement NCT said: “We recommend you leave plenty of extra time for your journey as buses have been delayed by up to an hour at the busiest times.

“The House of Fraser stop, J1, is closed because of these works. Customers can alight either at the previous stop on Woodborough Road or the next stop South Sherwood Street opposite NTU City Campus.

“We are very sorry for the disruption to your service.”

Drivers have taken to social media to vent their frustration.

Sam Houghton wrote on the Notts TV Facebook page: “I was stuck outside Rock City on Talbot Street at about 11am.

“It took nearly 40 minutes to get to Mansfield Road. The traffic lights sequencing was bad meaning cars were stuck across junctions and nobody could move.”