Nottingham City Council is planning to close five children’s centres and three libraries and slash community centre grants as it looks to save £38m over the next four years.

One of the areas in the firing line is Aspley – described by the council as ‘the most deprived ward in the city’.

The area is now at risk of losing its fourth community facility but the council says it is working hard to lessen the impact.

Local Democracy Reporter Matt Jarram speaks to those most affected by the proposals.

Locals say Aspley Library is more than just a library.

Standing on Nuthall Road, the art deco building with its glossy green lantern roof has served the community for 85 years.

The first brick – laid by Councillor John Albert Shaw in January 1937 – still forms part of its foundations and is a reminder of the library’s illustrious past.

But this building could soon be closed to the public alongside Lenton/Radford Library and Basford Library as part of plans to save Nottingham City Council £233,000.

Judy Milner, 75, has been a regular for 35 years. She remembers arriving in Aspley as a new mum.

It was Aspley Library where she found companionship, meeting other new mums, some of whom she still is in contact with today.

“They might think a library is just books, but it is not. It is taking away the last community facility we have left,” she said.

“It is a focal point. People might say it is a personal story, it is not a reason to keep a library open, but how many more stories are there of people coming to the library for support.”

Judy is not alone. There are many mums still visiting the library today for the same reasons.

First-time mum Georgina Kirkham, 38, was hit with the heart-breaking news in January that her 11-month-old daughter Gia had leukemia.

She attends the Tots Time sessions at Aspley Library, where new mums can introduce their kids to books and music.

“Because she is having treatment, there are not many things we can do, but Tots Time is something we can,” she said.

“We can sing songs and get her back into groups. Being in hospital, you can be isolated. Here, you can meet other mums. It is a lifeline. There is not much else, which is free, and within walking distance.”

Maths teacher Sophia Fallon, from the Nottingham Tutorial College, helps young people who have been kicked out of mainstream education.

She runs daily sessions with young people from libraries, including Aspley, helping them gain the relevant skills to pass exams such as GCSEs. She is one of around 10 teachers which offer this service.

She said: “I go to libraries every day – it is one-to-one support. It is not a trapped classroom and it is close to pupil’s houses.

“If libraries close that reduces the spaces we can go to.

“I do not know where we would go otherwise. I don’t think there is another option. Teenagers will be stuck. It’s sad. People need libraries so much.”

One of her pupils, 16, who has been removed from school and plans to follow a career in construction, said: “It really helps me a lot. I get distracted when there are other people around.” 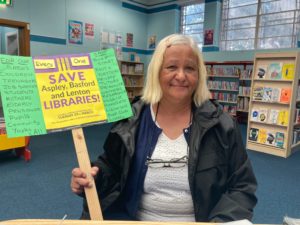 Anne Kimuyu, 61, is part of the Save Nottingham Libraries campaign group, which is petitioning for the city council to make a U-turn on the decision.

“Aspley is the most deprived ward in the city – how can they sleep at night? I have been unemployed, and a single parent and I have been here looking for jobs online, for research, for advice, and even signposted people here. It is not just a place for books.

“This is a safe haven for many people, and it should remain so.”

The library is not the only place under threat in Aspley. The council is also looking to close Amesbury Circus and Minver Crescent children’s centres unless another provider comes forward.

It also follows the YMCA not renewing its lease at the Youth and Community Centre in Melbourne Park after 16 years in the area.

Last year, it made the decision due to an “unsustainable rent increase” by the city council. The building now remains derelict and gated off.

The council says Aspley has a higher proportion (43 per cent) of children aged 0-15 years living in poverty, the highest in the city.

In this ward, a lower percentage (75 per cent) of children reached the expected level of development in communication and language skills at the end of reception year.

Mum-of-three Lucy Bradley says the children’s centre in Minver Crescent has been “a lifeline” for her four-year-old daughter.

“They have helped her with potty training and her speech. I think it will be really bad if it goes. It is an asset to Aspley,” she said.

“Aspley is losing a lot. It is a lifeline for parents.”

Mum Kate Minns, 41, who has lived in the area for the last 19 years, added: “There needs to be places for kids to go and learn. You will just get more kids on the streets. They have not thought about the children.”

William Wyle, 62, who has lived in Aspley for the last 30 years, added: “Aspley used to be one of the best places to live now everything is closing. The kids are going to miss out big time.

“The council might say ‘they have got no money’ but they are not spending the money in the right places.”

Former deputy leader of the council, Cllr Graham Chapman (Lab), who represents Aspley, regrets the decisions he says need to be made.

“We certainly don’t want to be in this position at all,” he said. “Most councils have shut all their children’s centres. The one that will serve the area will be in Broxtowe and it will be one of four in the city.

“In terms of the library, it is unfortunate, but it would need a lot of capital to bring it up to standard. We are working to reduce the impact and the library will have a click and collect service.

“The council gets blamed for cutting services but it is a consequence of government cuts. We are piggy in the middle.”

Cllr Sam Webster (Lab), portfolio holder for finance, added:  “Final decisions in relation to the Nottingham library network and children’s centres haven’t yet been made. Both are the subject of live public consultations.

“We are doing all we can to protect as many existing community facilities as possible and continuing to invest in our neighbourhoods, including in Aspley.

“However it can’t be overstated the extent to which councils have borne the brunt of Government funding cuts over the past 12 years.

“In Nottingham our main Government grant is £100m a year less than it was – and cuts of that magnitude have serious consequences.

“Many councils felt they had no alternative but to close libraries and children’s centres years ago – something that we resisted because we know their importance to local communities and were keen to protect them.

“But after years of making savings to balance smaller and smaller budgets, we have fewer and fewer options of where we can make further savings.

“These are still proposals that are open to live public consultation, so things could still change.

“The children’s centre proposals ensure that 86 per cent of likely service users are within 30 minutes of a centre by public transport or 43 per cent are within 20 minutes’ walk of a centre. And recently upgraded library facilities at Strelley Road are also nearby for Aspley residents.

“Setting a budget for the next four years provides some certainty and will mean that communities like Aspley will continue to have access to council services, but some may be delivered differently. ”