The worldwide smash hit musical Mama Mia! is coming to Nottingham’s Royal Concert Hall in June in the first ever UK tour of the show.

Mamma Mia! is the creation on stage of ABBA‘s timeless songs with a heart-warming tale of family, friendship and love unfolding on a Greek island paradise.

The stage show has been seen by more than 54 million worldwide in 49 productions in 14 different languages.

Creator and Producer Judy Cramer says: “It’s fantastic to be bringing Mamma Mia! to Nottingham for the first time with the tour.

“I feel sure that Nottingham audiences will love Mamma Mia! and it’s feel-good story and the much loved music of ABBA.”

The cast for the UK tour is yet to be announced.

Robert Sanderson, managing director of the Royal Concert Hall, Nottingham says: “I’m delighted that we are able to bring Mamma Mia! to the region at last after it’s phenomenal success in the West End.

“The Royal Concert Hall is the perfect stage for a musical of this scale.”

Tickets go on sale on Monday 30 March at 10am and will be available via the RCH website or alternatively by calling the box office on 0115 989 5555.

Mamma Mia: One of the biggest musicals of all time 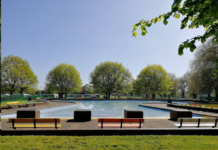