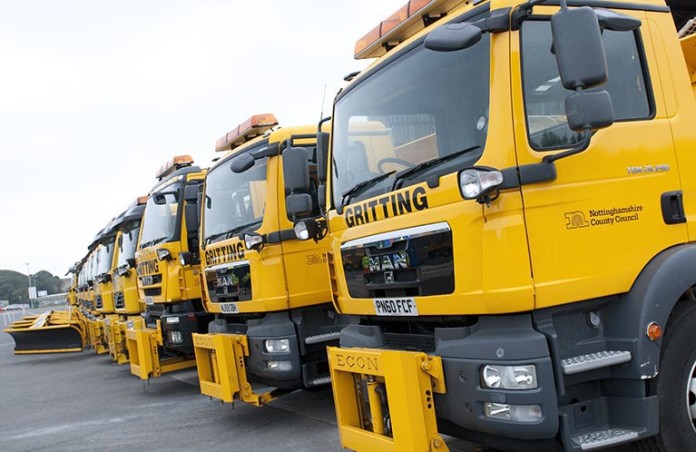 Nottinghamshire highways chiefs have outlined a number of common gritting misconceptions as bad weather hit the county over the weekend.

A yellow weather warning was issued by the Met Office for snow and ice over the weekend and bosses at Nottinghamshire County Council have moved to dispel myths surrounding the gritting process.

One of the misconceptions outlined by the council is that once the gritters have put salt on the roads, all the road ice will melt.

According to Andy Warrington, the authority’s service director for highways, this is simply not true.

“Spreading salt on the road is only the start of the de-icing process.” He added.

“Movement of salt around the road by traffic is essential to complete the process. Overnight, when traffic levels are low, roads can remain icy for some time.”

Andy also dismissed the ‘myth’ that spreading salt on fresh snow will melt it quickly.

“Spreading salt on the road is only the start of the de-icing process.”

“This is not true! Salt only effectively melts snow when it is less than 40mm deep and traffic can move the salt around. It is essential we plough fresh snow to a depth of 40mm before spreading salt.

“Gritting makes road surfaces safer but it cannot prevent frost appearing or snow falling. If the weather is severe, we cannot keep even continuously gritted roads entirely free of ice and snow.”

Further ‘myths’ identified by the council include:

Myth: “No matter what the temperature, salt will melt the ice.”

Myth: “There is ice on my car/the air temperature is 0°C, so there must be ice on the roads.”

When required, the authority say it grits 902 miles of A and B roads across the county, which is equivalent to one third of Nottinghamshire’s entire road network, at a cost of £2.45 million a year.

If the council was to grit every road, Andy said that it would cost an extra £5.2 million, plus an additional £8 million to pay for new equipment and salt storage.

“We have to strike a balance between keeping critical roads available and the very high cost of gritting roads, which has to be paid for by the public.”

Nottinghamshire County Council was subject to heavy criticism from members of the public last month after snow fell quick and fast across the county.

Speaking about the gritting efforts after the Boxing Day white-out, chairman of the authority’s highways and transport committee, Councillor Kevin Greaves, said that while crews were set to go out prior to the snowfall, it arrived unexpectedly early.

“The weather forecast for Boxing Night was for rain in the evening, followed by snow some time after midnight.

“You can’t treat roads during rain as it would simply wash all the salt away.

“Despite what people think, no amount of gritting can prevent that amount of snow from settling on our roads without a bit of help. We use rock salt to help clear our roads – and it needs vehicle movement to help grind it into the snow and ice.”

“You can’t treat roads during rain as it would simply wash all the salt away.”

Responding to the Boxing Day criticism at a meeting earlier this week, Councillor Alan Rhodes, the Council’s leader, said that he felt gritting teams did well in difficult circumstances.

The authority is now calling for the public to get involved and play their part in keeping the county moving if snow falls again, while Cllr Greaves moved to assure people that gritting teams will continue to work hard during the winter months.

“We’re also asking residents to play their part, by being prepared by stocking up on salt and grit themselves.

“There’s no reason why people shouldn’t clear residential streets and pavements if they are able. Despite what many people think, we don’t salt residential roads – we never have and to do so would cost an extra £5m a year.”