Nottinghamshire man David Dixon is still unaccounted for after the Brussels terror attacks despite a huge social media campaign.

Mr Dixon was believed to be travelling on the city’s metro system around the time bomb blasts ripped through Maelbeek metro station and the airport on Tuesday.

He then failed to arrive at work in the Belgian capital and friends from Nottinghamshire started a campaign across Facebook and Twitter to try to find him.

He has been working in Belgium for a number of years but friend Simon Hartley-Jones, chief executive of Mansfield Citizen’s Advice Bureau, said he has a home in Mapperley and desperately appealed for news.

But as of Thursday morning Mr Dixon is still unaccounted for.

His family includes partner Charlotte Sutcliffe who is reported to be in the city searching for him with other relatives.

Charlotte’s sister, Marie Suitcliffe, told Radio 4’s Today Programme on Wednesday: “She’s been on social media with friends helping to put out the message that he is still missing. She has been involved with the British consulate.

“When she was at the hospital, she had an interview with the police so they’ve got all the details now.

Islamic State militants have claimed responsibility for the attacks, which killed at least 33 people and injured hundreds of others.

In a statement the Foreign and Commonwealth Office said: “We are concerned about one missing British national and we are in close contact with the Belgian authorities.

“We are aware of four British nationals who were injured in the attacks – three are being treated in hospital, one has already been discharged. Our embassy staff are working to assist all British nationals affected. 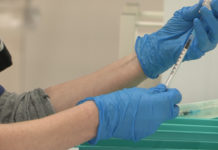