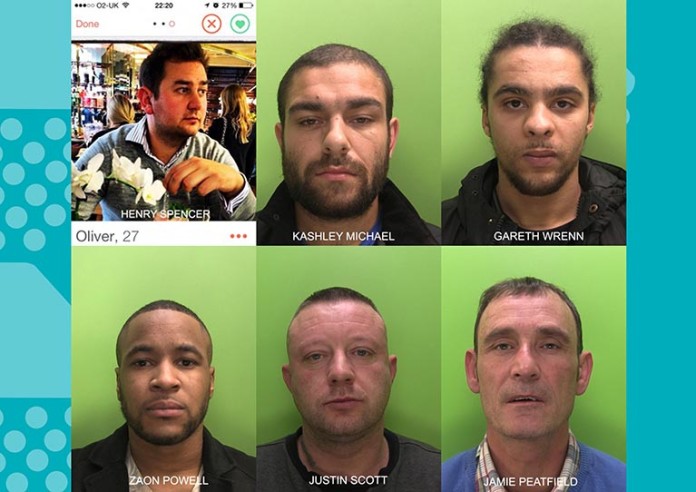 Nottinghamshire Police has released pictures, and  a Tinder photo, of six men wanted for separate offences.

Detective Chief Superintendent Helen Jebb of Nottinghamshire Police said: “You’ll see that the people we need to talk to are sought in relation to some very serious matters.

“We believe they may have had some involvement with these offences so it is vital we trace them as soon as possible.

Henry Spencer, 28, is wanted in connection with grievous bodily harm against a woman on 16 November 2014.

His last known address was Warwick Brewery, Newark, but he is suspected to now be in the Doncaster area.

An image of Spencer was found on dating app Tinder, though the account is under a false name.

This 22-year-old is wanted in connection with the supplying of drugs in St Ann’s.

The police are advising anyone who sees Wrenn not to approach him.

Michael is wanted in connection with a robbery and for failing to attend a Crown Court sentencing.

The 26-year-old’s last known address is Waldeck Road in Carrington.

Justin Richard Scott, 40, is wanted in connection with an assault as well as an offence of criminal damage in Arnold in March.

Scott has lived in Arnold, but he also links in Skegness and Chapel-St-Leonards.

Powell is wanted in connected with a domestic robbery which took place in Hucknall in March.

Peatfield is wanted in connection with an assault and breach of his bail conditions.

He was last seen in the Retford area on 26 April 2015 and officers believe he is still residing there.

We’ve already made extensive enquiries in an effort to find these people but now we are calling on the public for help.

Those with information concerning the whereabouts of any of the following men should call the police on 101 or Crimestoppers anonymously on 0800 555 111.