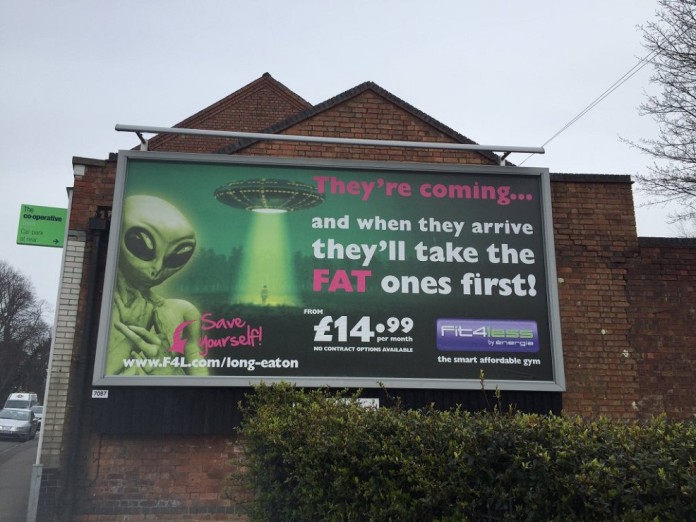 The founder of a Nottinghamshire charity has criticised a gym for ‘shaming’ overweight people with an advert outside a supermarket.

Natalie Harvey, of Combat Bullying, took to Twitter after seeing the billboard on the side of a Co-op in Sawley

The advert shows an alien next to a flying saucer with a message that reads: “They’re coming… …and when they arrive they’ll take the fat ones first!”

It adds: “Save yourself” with an arrow pointing to the gym’s website.

Ms Harvey wrote on Twitter: “Rather than shaming the overweight in society let’s encourage and help them. This poster IMO [in my opinion] is bullying.”

She also told Notts TV: “I’m most concerned about children seeing the posters. It’s on a busy road near schools – children walk past it every day.

“Suicide rates among children are on the up, bullying is endemic. When campaigns like this highlight picking on another person it is aiding bullying.”

I think it gives ammunition to bullying

Adding to her earlier Twitter comments she said: “I wouldn’t say the poster itself is bullying – I think it gives ammunition to bullying.”

In response Fit4Less has said it did not mean to cause offence and the poster is a “light-hearted” approach to the idea of needing to stay in shape.

Rather than shaming the overweight in society let’s encourage & help them @Fit4lessUK this poster IMO is bullying pic.twitter.com/4ovwaPfyH8

A gym spokesman said: “Our clubs are here for everybody to help them have a healthy lifestyle.

“Some people can feel intimidated about coming in to a club if they think it’s full of tiny ladies or muscle-bound men. We want to steer away from that.

“We don’t want to upset anyone or offend any body, and we don’t want to bully anyone in to coming in to a gym, we just want people to enjoy a healthy lifestyle.”

Ms Harvey added she had been targeted online with comments to her Twitter and Facebook pages since speaking out about the poster.

She added: “Good job I’ve got thick skin I’ve been told to watch my back, called fat and everything in between from a do-gooder to shameful #postergate.

“I’m not a killjoy – this is unpleasant and yes obesity is on the rise but shaming isn’t the way.”