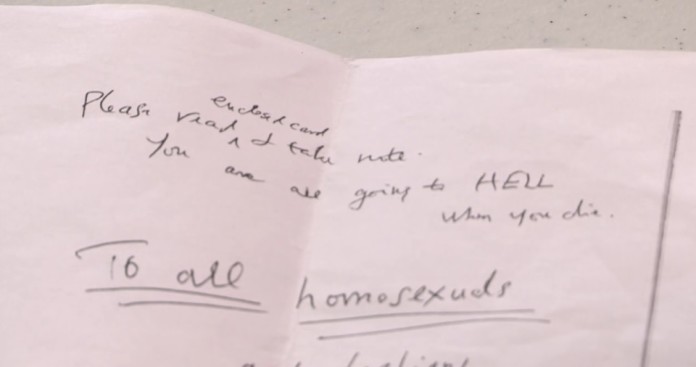 A letter branding the gay community as ‘filthy’ has been handed to volunteers at a charity event in Nottingham.

The note, also says ‘all gays and homosexuals should be exterminated’.  It comes as  Nottinghamshire Police report an increase in the number of homophobic hate crime incidents being reported in the county.

Police say 64 incidents were reported to them last year – up from  49 in the previous year.

The man who was given the letter,  Richard Almond, says he was shocked and surprised that somebody believed it was acceptable to write such an intimidating note.

Richard is a volunteer at the Nottingham Lesbian and Gay switchboard.

He says, “We were at the Broadway promoting switchboard, we were at the table when a gentleman came up, plonked a card on the desk and said this is for you lot,.”

The not said, ‘Please read enclosed and take note. You are all going to hell when you die. You are all discusting, filthy and despicable.’

The final part of the note said that all gays and homosexuals should be exterminated.

Richard says, “There are people who are more sensitive than maybe myself who are coming to terms with their sexuality and it can make people do serious things, such as commit suicide.”

“… the final bit said that all gays and homosexuals should be exterminated.”

Superintendent Ted Antill, Nottinghamshire Police’s force lead for hate crime, says there is still a lot to do in tackling this type of crime.

“We are concerned about the levels of hate crime targeted against people from the LGBT and disabled communities,” he says.

“But while all types of hate crime is rising we are encouraged by an increased level of reporting of such incidents.”