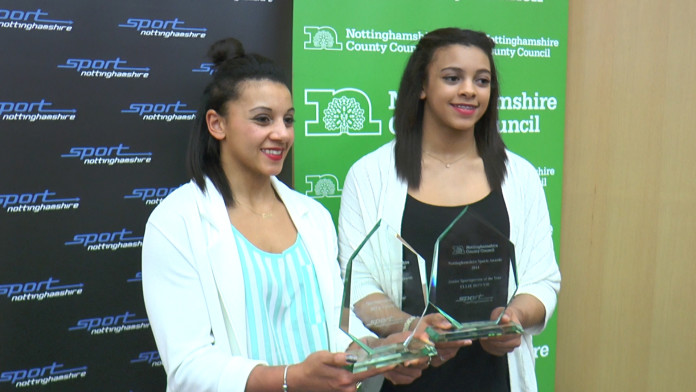 Notts celebrated the sporting achievements of grassroots and professional athletes in the county at the 23rd awards ceremony.

There was joy for sisters, Becky and Ellie Downie, who both won their categories at the ceremony, which is backed by Nottinghamshire County Council and Sport Nottinghamshire.

Becky, 23, picked up the Sportsperson of the Year award, following in the footsteps of fellow gymnast Sam Oldham in 2012.

Last year Becky won gold medals at the Commonwealth Games with the British Women’s team in Glasgow and for her performance on the uneven bars at the European Championships in May.

And the Downie family celebrated again as Becky’s younger sister, Ellie, 15, scooped the Junior Sportsperson of the Year award.

They believe that  the local support they receive is key to their success.

Ollie Hynd picked up the Disabled Sportsperson of the Year for the second year in a row to cap a memorable 2014. Ollie, from Mansfield, won gold at the Commonwealth Games and at the European Championships in Sofia.

“It’s really special,” he said on winning the award.

“I’m really proud to come from Nottinghamshire, to be able to train in Nottinghamshire and they’ve really supported me so that I can achieve my goals so tonight is a proud moment for me.”

“Look at all the talent in the room, it’s fantastic! It’s a credit to Nottinghamshire and all the facilities and set ups we have in the county. We are very lucky.”

Sporting School of the Year – The Samworth Church Academy