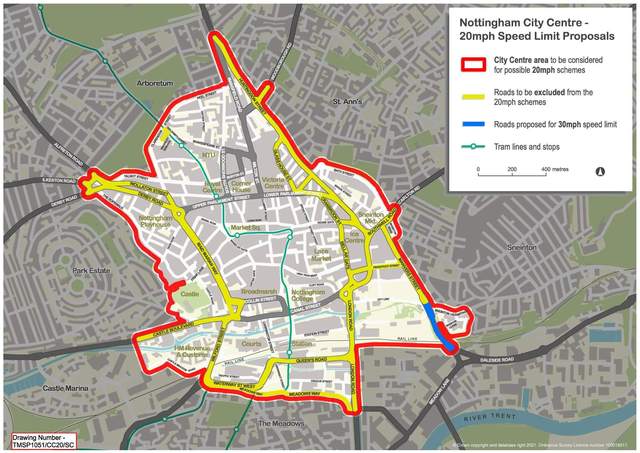 Nottingham risks alienating motorists if a 20mph speed limit is imposed in the city centre, a city councillor has warned.

The council is planning to introduce a 20mph speed limit around the city centre to encourage more people to walk and cycle.

But the leader of the opposition Conservative Group Cllr Andrew Rule, said: “This is yet another attempt by the city council to make Nottingham the most unfriendly city for vehicles in the country.”

Concerns have also been raised by Hackney taxi drivers who feel the Labour-run authority is forcing the public onto its buses and trams.

The local authority argues it is simply making the city cleaner and greener and encouraging more  people to walk or cycle short journeys.

In 2015, it reduced speed limits from 30mph to 20mph in almost all residential areas. It is now looking to increase the number of streets with a 20mph limit to include much of the city centre.

Some roads such as Maid Marian Way and London Road have been taken out of the scheme after concerns raised by Nottinghamshire Police and public transport operators.

But the council says these roads may be changed to 20mph in the future.

Most roads around the city boundary will be part of the scheme, including Talbot Street, Clarendon Street, Peel Street, Shakespeare Street, and around the Nottingham Trent University Campus.

Nottingham City Council has received £2 million from the Government’s Active Travel Fund, part of which will be used to slow the speed of traffic within the city centre.

Deputy council leader Cllr Sally Longford (Lab) said: “We want to create a city that is built around the needs of people, rather than cars.

“To do this we need to encourage sustainable travel and make the city a more attractive place to walk and cycle. Reducing the speeds of vehicles on more roads will help to make people feel safer and create a more attractive environment for all.

“More people switching to sustainable travel will contribute to cleaner air, and also help towards our ambition to become a carbon neutral city by 2028.

“Feedback from the informal consultation was supportive which is why we are continuing to the formal stage of the process.

“We listened to feedback to concerns over speed limits on certain roads, such as Queen’s Road and London Road and have excluded those from the proposals.”

According to the council, 421 people responded to their informal consultation with 70 per cent of them agreeing or strongly agreeing with a 20mph speed limit.

But Cllr Rule (Cons) said: “It will discourage shoppers wanting to come into the city, will have an adverse effect on retail and will harm the long-term regeneration prospects of the city centre.

“In my view that £2m would be better spent on additional tram stops in places where we don’t currently have them, such as Silverdale.”

Taxi driver of 26 years, Chander Sood, from the Nottingham City Hackney Carriage Owners & Drivers Association, said: “They are making it difficult for drivers to drive in the city centre.

“They are trying to keep the drivers out so more and more people can use city transport. Many of the streets have already been reduced to one lane so in peak hours you are driving at 10mph.”

A formal consultation on the 20mph scheme will begin on Monday, August 23, and the council will make a final decision later this year.

The council says some roads not included in the current proposal, including Huntingdon Street, Derby Road, Maid Marian Way and Castle Boulevard, may be reconsidered for the 20mph speed limit at a later date.