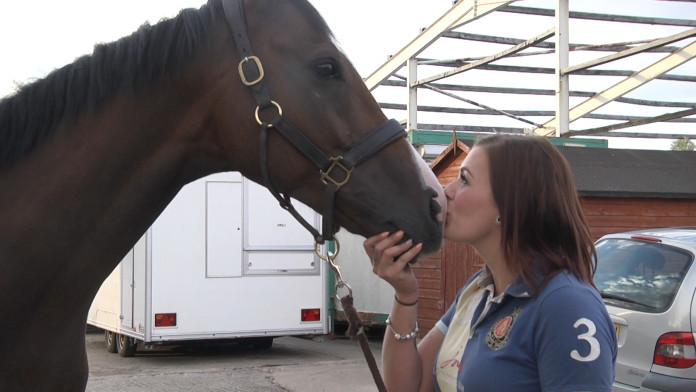 Zee-Jay Ruffin, of Long Eaton couldn’t believe her luck when the horse she brought at market turned out to be a winning racehorse raced by Frankie Dettori worth over £20,000.

The 22-year-old went to Derby Market with no attention of coming home with a horse. She initially went to purchase pig feed but finished up looking at a few of the horses at the auction.

West Leake Diman, nicknamed Wesley, immediately caught her attention, standing out from the other horses surrounding him.

Zee Jay said: “He was just so big and proud, too proud to be cramped into one of those stalls. It broke my heart but I had to walk away initially, facing the fact I hadn’t got much time or money for him.”

Her feelings soon changed, and she was compelled to bid, siding with her heart over her head.

“Then I went into the auction ring and saw him come through, his big beautiful eyes wide open with fear.”

‘I saw the meat man bid on him and in that moment decided I couldn’t let that happen to him.’

– Zee Jay, now the owner of an ex race horse

When she brought him, Zee-Jay didn’t even know the horses name or any back history. It was always going to be a risk. She spotted a well-known meat man betting in the auction, which motivated her to step in and purchase the horse, bidding until he was hers.

Video: Zee Jay talks about the moment she saw Wesley for the first time

The final bidding price was £350. Zee-Jay couldn’t find any information on the dealer who sold him, but doubts he knew anything of Wesley’s achievements as he was brought in for a quick sale.

‘After spending 3 hours trying to load him, a huge hit of realisation to what I’d done hit me. But he was home, and safe and that all that mattered to me.’

Since purchasing the racehorse, Zee-Jay looked at his passport and then Googled him. She was pleasantly surprised to discover his top racing background and breeding. She found out more about him from contacted his trainer, who happily explained Wesley’s history.

He was chosen to be raced by the top jockey after achieving first place on two occasions in 2011 with different jockeys, Matthew Lawson and Robert Havlin.

Picture: Wesley, the six-year-old who ran 21 races as a race horse.

After contacting the previous trainer, who was fond of the horse, Zee-Jay found out he had been retired from racing early into his career as a result of having panic attacks in his last races.

He was checked over by vets after he was thought to have breathing problems, but it was proved to be a purely psychological issue.

‘He was then sent to a racehorse retraining centre, where he was trained and was then re-homed to a couple to ride as an event horse. From there, he was sold to a dealer who brought him to market. In a short space of time, he was passed around a lot, sadly ending up at the Derby market.’

‘It’s so sad when you think this amazing horse was worth so much and so good at his job, as a racehorse. I’m glad though, as it means he’s now mine!’.

This is unfortunately the reality for many ex racehorses, who are quickly sold on at low prices once they finish their racing career.

As a typical ex-racehorse, ‘Wesley’s very challenging, he can be very dominant and aggressive, like a German Shepard!’ says Miss Ruffin.

‘I was dreading the first time getting on him but he was actually very chilled, considering he’d only been out of the racing circuit seven months.’

Picture: Zee Jay hope to train up Wesley to be able to compete in horse shows.

After lots of hard work from his new loving owner, Zee-Jay, Wesley is recovering from his market ordeal. He has been treated by vets and is slowly being restored and is once more a healthy looking, energetic horse.

‘He shows his racer side sometimes! His aggression on the ground is slowly getting better now as he’s on treatment for ulcers. It’s a long hard process but we’ll get there. I won’t give up on him yet.’

-Zee Jay won’t give up on her market horse just yet.

‘My hopes for now are to just get him into good condition and to convert him from a racing horse to a normal riding horse. I’d then like to start competing with him next show season’.

Miss Ruffin confesses that although she initially bought him as a rescue project, to be sold on to another home eventually, she has fallen completely in love with Wesley and will not be parting with him.

She described him as: ‘a cheeky, good looking boy and he knows it! He can get away with anything because he looks so sweet.’

‘He’s very curious and acts like a baby, that’s common for racing horses when they retire as they get to experience life for the first time without racing. He’s extremely talented and I’m sure we will go far, he’s a got so much potential’.