A Nottingham food bank boss has warned some families have started skipping meals due to soaring bills and says the Government should act now to avert a winter crisis.

Shoana Qureshi-Khan, deputy director of the Himmah Food Service in Radford, says it is giving out roughly 240 individual food parcels a week to more than 100 different households – around five times more compared with this time last year.

The increase comes as gas and electricity bills soar amid 10.1 per cent inflation, leaving people “constantly missing meals” and struggling to afford the energy to cook their food.

New Prime Minister Liz Truss is expected to reveal her plans to tackle the cost of living crisis this week, with the Conservative leader understood to be planning a £100bn funding package.

This could see the wholesale cost of gas produced in Britain frozen, forcing energy companies to sell it at a loss in a bid to drive down bills.

However, no concrete plan is yet to be announced – Ms Truss is widely expected to set out her policies on Thursday (September 8).

“Families are having conversations about feeding their children over themselves, juggling two or three part-time jobs and it’s causing ill health and mental health issues.

“Each week, we see exponential growth in the number of people coming forwards. Over the winter period, it’s going to be unprecedented.

“We knew this was coming and I think if the Government doesn’t act on this now, it’s literally saying to the British public ‘we don’t care’.

“Liz Truss should prioritise this and make this a statement to the British public that she cares about the millions of people in this situation.

“They need to stop making noise about it and start looking for solutions, and to reassure the public about how they’re going to get through a bleak winter.”

She added that support is there for people who need it, urging struggling families to reach out.

“While people may feel they’re not being heard in lots of ways, there are services out there that will help them,” she said.

“They will get them through this difficult period, people just need to reach out to them for support.”

Her comments come as Mansfield District Council and Nottingham City Council both plan to declare a ‘cost of living emergency’ next week.

The two Labour-led authorities would follow the Ashfield Independents in Ashfield by declaring the emergency, which calls on Whitehall to offer intensified support to struggling households.

In Mansfield, the authority says food parcel use hit 4,200 in March this year alone, up by 62 per cent year-on-year, adding both households and businesses are feeling the pinch from increased energy costs.

In a motion due before full council on September 13, the council will call on the Government to offer immediate financial help to residents and to local government to help those most in need.

The council will also call for energy support for struggling businesses, to consider a cut in VAT, for investment in insulation, nuclear and renewable energy, and for a “longer-term approach” to economic growth.

A similar motion is due before Nottingham City Council’s full council a day earlier (September 12). 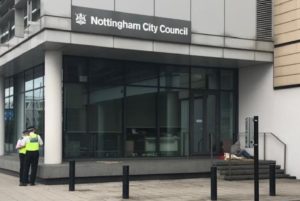 In that motion, the Labour-led authority will also call for more insulation and for a VAT reduction.

It will also call for the return of the £20 Universal Credit uplift, removed following the pandemic, for the return of a pensions ‘triple lock’ to ensure State Pension rates match inflation, and for an emergency budget on the issue.

Prime Minister Liz Truss will address the issue later this week alongside her new Chancellor, who is widely expected to be Kwarsi Kwarteng.

Speaking in her leadership acceptance speech on Monday, she said: “I will deliver a bold plan to cut taxes and grow our economy.

“I will deliver on the energy crisis, dealing with people’s energy bills, but also dealing with the long-term issues we have on energy supply.”