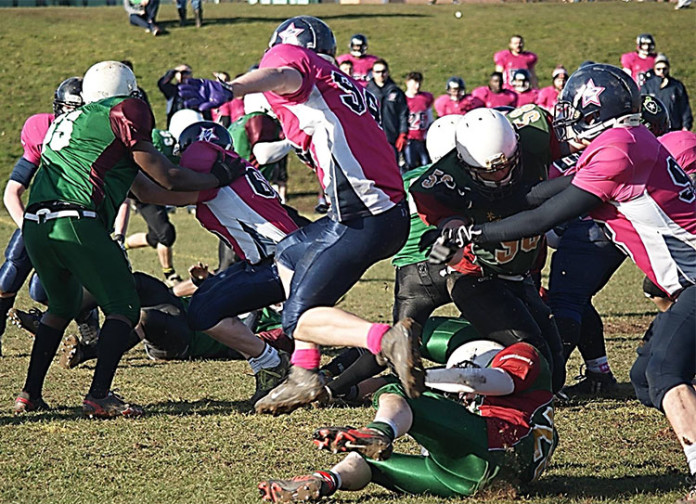 Just over 30 years ago the UK had no time for American football.

Then Channel 4 took a gamble and started broadcasting NFL games late at night.

Fast forward to 2016 and there are six sides in Nottingham alone – the most of any city outside London.

The rare combination of violence and intelligence has helped it to become the fastest growing sport in the country, with more than 300 players in Nottingham trying it out for the first time this year.

To those within the game, it finally feels like ‘gridiron’ has landed.

There is also a women’s flag football team at the University of Nottingham, founded in 2013 – a version of the game without kit or contact.

Set up a team from scratch

The story of the sport in Nottingham starts in 1984 with Barry Boseley, who founded the Nottingham Caesars.

Based at the Harvey Hadden Stadium, Bilborough, they are one of the oldest teams in England and have gone on to enjoy 31 successful years with ‘Coach Boseley’ at the helm, winning three Conference Championships.

Barry said: “The problem we had way back then (the 80s), was there was nothing, no teams, no infrastructure, nothing;  just a few guys quietly watching the games in the comfort of their own homes.

“We had to set up a team from scratch so my lad and his mates could play the sport they loved. Now teams are popping up everywhere, there’s no better time to play the sport.”

The history of American Football in the UK

American Football’s roots can be traced back to Rugby, with a few key rule changes, noticeably, allowance of forward passes, a line of scrimmage and down and distance rules meaning a team only has four attempts to get 10 yards or possession is forfeit to the other team.

The game in its early years was particularly brutal, with 18 deaths and nearly 160 serious injuries including broken necks, crushed skulls and punctured lungs in 1904 alone. This forced President, Teddy Roosevelt, to act, introducing further rules to make the game safer.

In 1983 Channel Four began showing highlights of NFL games and in 1986 the NFL began playing the ‘American Bowl’ at Wembley.

In 1985 the first structured league season began in the UK.

The 1985-6 season saw the introduction of a university league which has gone onto become the largest in Europe.

In 2007 the NFL returned to Wembley with a regular season game between the Miami Dolphins and the New York Giants. There has been a further 13 games played at Wembley since with an average attendance of well over 80,000 making the probability of a team being permanently based in England look increasingly likely.

The game then went through a boom period in the 80s with lucrative sponsorship deals from global companies such as Coca Cola and Budweiser and games attracting large crowds.

Dave Tidswell, played for the Nottingham Hoods for five years from their formation to 1988.

He said: “American Football was most popular in the UK from the mid eighties through to the early nineties.

“The standard of play was relatively high due to the better teams having American import players and coaches.

“The local derby games against the Leicester Panthers and Birmingham Bulls would attract the biggest crowds and the atmosphere was electric, with the fans chanting and playing drums.”

However due to financial problems many of the big teams of the 80s folded in the 90s, but the sport is well and truly on the road to recovery with mounting, local interest.

Andy Cusworth, who played for the Caesars for eight years and now helps run things off the field, said: “We’ve had a massive response this year, with just over a hundred people attending the first of our six sessions.

“We’ve had some great turnouts in the past following some good recruitment drives, but this is the biggest intake I’ve seen in my time with the club.”

The Nottingham Caesars finished last season in mid-table after winning four, losing five and drawing one of their 10 games.

They will compete next spring in the newly found Midlands Division, the second highest tier in the country.

Andy added: “It’s truly like no other sport. When I started we had a quarterback who was 5ft 2ins and ten stone, I’m 6ft 4ins and 27 stone there is truly a position for any age, shape, size and fitness level.

“There is no other game which has the level of strategy mixed with physicality and the camaraderie and team spirit is unparalleled in any other sport I’ve ever played or seen.”

Dave Tidswell -“The protective equipment means that you can go all out with the contact.”

There are further plans to introduce another team in Nottingham – a kitted 14-16 year Caesars junior team, taking the Nottingham total up to seven teams.

“All the potential is there if the authorities change their stance on amateurism and imports the sport could grow to rival perhaps rugby league, attendance wise.

“The introduction of import players and coaches would raise the level of play and make the game a more attractive spectacle leading to larger crowds. In the 80s highly skilled import players were big attractions.”

One team that is keeping up with the times is the Nottingham Caesars with all home games next season being streamed live on Caesars TV on YouTube.

With more people watching the sport, more people playing, and more teams than ever before, hopes are high 2016 will be the breakthrough year for a game which has spent so much time on the fringes.

“All the potential is there,” adds Dave, “we could be in the same position as the big European leagues.”