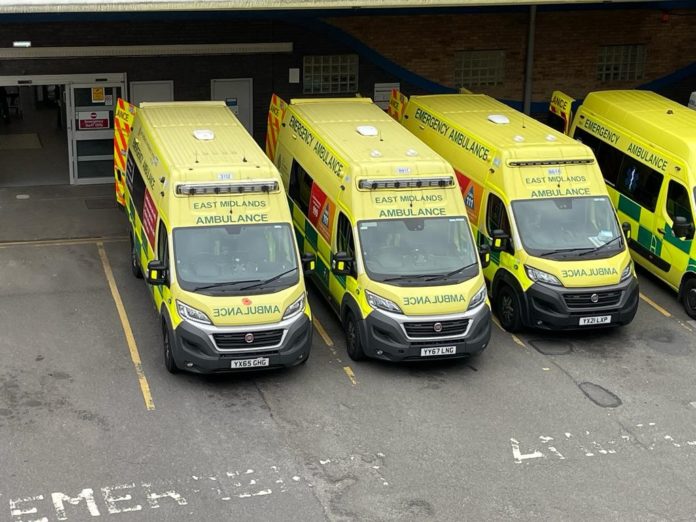 There is “no easy answer” for fixing long delays in Nottinghamshire ambulance response times as the wider health network faces backlogs in patient discharges and handovers in hospitals, an ambulance service boss has said.

New East Midlands Ambulance Service (EMAS) figures show the organisation missed all its response targets for both category one and category two emergencies across Nottinghamshire in the 12 months to July.

This was partly put down to difficulties in handing patients over once ambulance crews have taken them to hospitals.

One councillor has recounted her father having to wait hours for an ambulance to arrive at his home before finding “rows” of patients and paramedics left waiting on wards because the hospital had a backlog in dealing with admissions.

The figures and anecdotes have sparked concerns the health service could struggle further as the winter months loom.

The EMAS figures revealed crews failed to meet their average seven-minute target for category one incidents – those classed as immediately life-threatening – in every month between August 2021 and this July.

This was replicated for category two emergencies – those not classed as life-threatening but requiring an immediate response – with some patients waiting longer than two hours for an ambulance to arrive at the scene.

She said: “I phoned an ambulance for my father and was told he would have to wait five to six hours because, at that stage, he was still breathing.

“[Later on] when I went to pick him up, there was a separate room full of beds literally next to each other. I was shocked, it was like something you would see on the front page of a newspaper.

“Bed after bed, and in the corridor, there were 22 trolleys all with two members of EMAS staff and paperwork waiting hours. One of the reasons people aren’t getting an ambulance is because staff are in a corridor in hospitals.”

During the meeting, councillors questioned EMAS bosses on what more could be done to support the organisation and improve the waiting times.

The committee was told Nottinghamshire figures are lower than those in other parts of the East Midlands covered by EMAS, which includes Derbyshire, Leicestershire, Lincolnshire, Northamptonshire and Rutland.

And Greg Cox, divisional director for Nottinghamshire, said solving the issue locally is not “as simple” as putting more money into EMAS.

He told councillors: “There’s no easy answer to this but I wish there was – I wish it was as simple as EMAS needing more money to invest in extra staff but, in terms of Nottinghamshire, this wouldn’t cut it on its own.

“It’s the hours we’re losing [to hospital turnover] and more about the patient flow, what availability hospitals have to discharge patients, because that gives them the ability to take patients off us.

“I don’t like to use the word efficiency when I’m talking about patients but that’s what it is, really. It’s about the system having the ability to be more efficient.”

The meeting also heard from healthcare bosses who said the wider network is under “sustained pressure”, impacting significantly on discharges and patient flow.

However, they did recognise work could be undertaken to change “complex” systems and alter the way people use the health service.

Caroline Nolan, system delivery director at the Nottinghamshire Integrated Care Board, told councillors: “It’s about how our residents flow through our system and encouraging people to use the services correctly.

“Don’t call an ambulance if you don’t need one. Every person who spends too long in [the emergency department] will probably then spend too long in a ward.

“Nobody is doing this because they want to get it wrong but because it’s become really complicated.

“Our role as a health and care system is to make it work more smoothly, to keep people safe at home and make them not even think about coming to the hospital.”