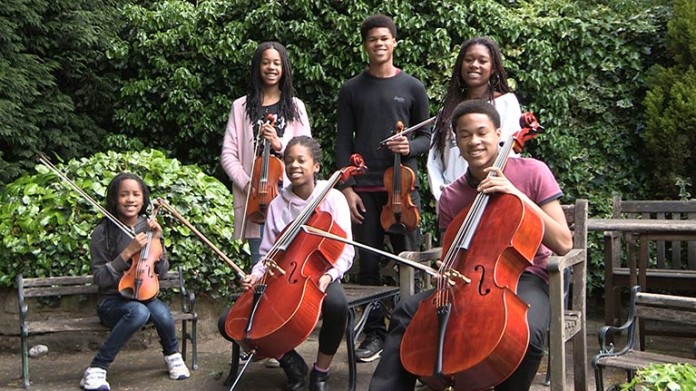 Classical family group The Kanneh-Masons practice for the live stage of Britain’s Got Talent (BGT) in Mapperley.

The Kanneh-Masons got a standing ovation from 3,000 people and the Britain’s Got Talent judges put them through to the live competitions when they auditioned on the show.

The group is made up of six talented siblings. Singer Sir Elton John was so impressed by 18-year-old Isata Kanneh-Mason that he’s paying for her music tuition fees.

Pianist Isata even reached the finals of BBC’s Young Musician of the Year in 2014.

The members of The Kanneh-Masons include Aminata, Jeneba, Konyka, Sheku, Braimah and Isata Kanneh-Mason. The youngest member is 9 whilst the eldest is 18.

They had a standing ovation from all four judges, which doesn’t happen often for classical music performances on Britain’s Got Talent.

Normally, classical musicians don’t get that good of a reaction.

Video: The Kanneh-Masons practising together

Their mother, Kadie Kanneh, has always encouraged her children to play classical music and has a strict routine for them when it comes to practising.

Although they’ve currently got a very busy schedule preparing for the live show, teenager Isata is optimistic.

Because we enjoy it so much we’re just looking forward to it and I think everyone’s really excited.

The classical group will be performing live on the show this Thursday, as they hope that Nottingham will help put them through to the finals.