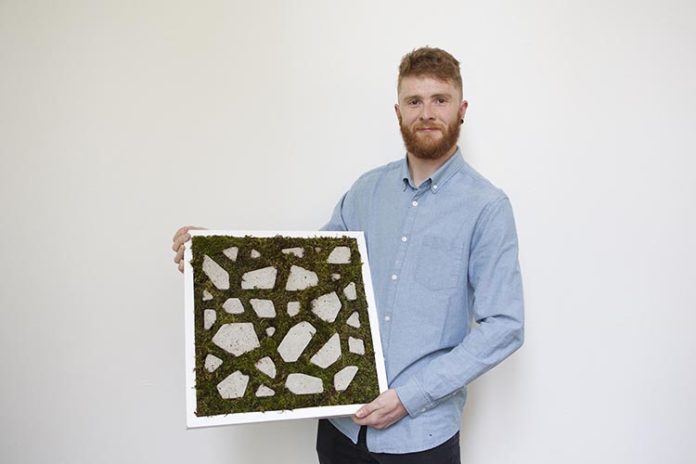 Jack Johnson says his creation will allow the moss to remove gases such as carbon dioxide, sulphur dioxide and nitrogen dioxide from the air in stuffy urban offices.

His idea is to save money for businesses by replacing classic office plants with the innovative and inexpensive alternative, which he says has the same benefits.

Jack said: “I developed the concept in order to combat the problem of air pollution within office spaces in congested cities around the world.

“I was particularly inspired by the smog that affects Beijing, which is especially bad at the start of the year.”

High levels of air pollution can cause serious health risks such as illnesses like asthma and even lung cancer in severe cases.

James Dale, principal lecturer, BA Product Design, Nottingham Trent University, said: “The unique moss wall panels are decorative as well as functional and it would be great to see his project put into wider production.“

The panels will include ‘foamcrete’ which is scattered between the moss, and the design was inspired by a Chinese room divider.

The panels need just a light misting with water to keep the moss alive and each one is around 45cm x 45cm in size, which neutralises 4.92m3 of polluted air.

The invention will be exhibited at Nottingham Trent University’s Degree Show, which will be held at the university’s city site between June 4 and 11.

The World Health Organisation (WHO) ranked the city as one of the worst offenders in the UK, with levels of pollution above the recommended safe levels.