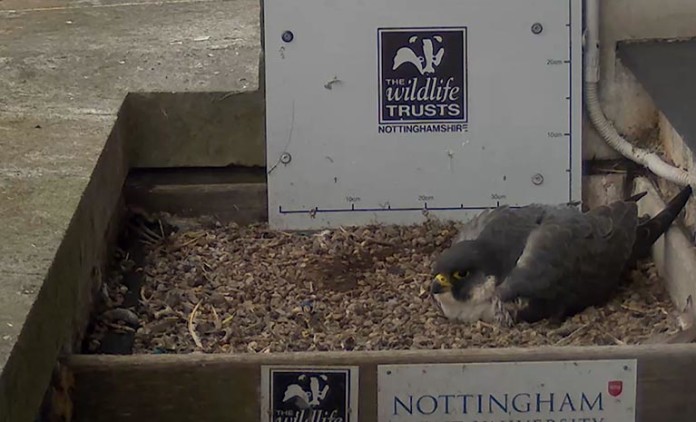 A pair of peregrine falcons have returned to Nottingham and have laid two eggs on their nesting site on the roof of a Nottingham Trent University building.

The protected species have been nesting on NTU’s Newton building on Burton Street for around 13 years and the two Nottingham birds of prey are thought to be the first pair to lay eggs in the East Midlands.

A live stream of the specially made nesting site can be watched via Nottingham Trent University’s website.

Nesting sites like this one for peregrine falcons are supported by Nottinghamshire Wildlife Trust.

Video: Nottingham Trent University’s reaction to the return of the falcons.

The peregrine falcon is a protected species in Britain and according to the Royal Society for the Protection of Birds it is estimated that there are 1,402 breeding pairs in the UK.

In 2013 three chicks where hatched at the NTU nesting site.

Video: Three falcon chicks at the nesting site at NTU’s Newton building on Burton Street in 2013 filmed by NTU.

For more on this story watch Notts TV news at 5.30pm Thursday