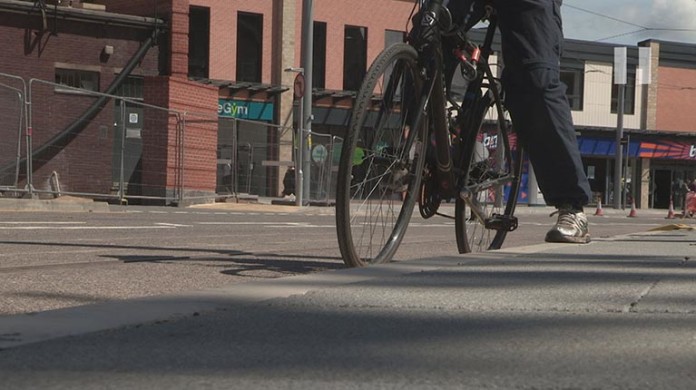 RideWise, a cycle training charity, brought a message of safety to Beeston cyclists ahead of the introduction of a forthcoming tram line.

The RideWise guide includes advice on cycling safely near trams and a map of new cycling routes in Beeston and Chilwell.

It will also feature a Nottingham City Cycle Map that shows the locations of secure bicycle lock-ups.

Tiffany Jackson-Bieeu, the events and marketing officer for RideWise, spoke about the dangers of riding a bicycle around the tramlines:

Video: The dangers of cycling near tram tracks

She added: “I think there are some concerns probably just because there have been some accidents where people have got stuck in the lines.

“That seems to be the majority of the concern rather than actually problems with the trams themselves.”

Image: Trams can pose a serious threat to cyclists

Edward Pode, an avid cyclist, luckily came away unscathed after an accident on the tramlines in the town centre recently.

The University of Nottingham student said: “With the tram works going on there was not a lot of space on the road, so I was cycling parallel to the lines and I got a bit too close.

My wheel got caught when I tried to turn off the road and I got thrown off my bike.

Qualified instructors were on Chilwell High Road, Beeston to offer free training and advice to everybody in the area.

As an instructor for RideWise, Michael Howard urges cyclists to fully concentrate while on their travels.

He knows this too well having previously fallen by the tram tracks, though fortunately it was just his pride that got injured.

Speaking to Notts TV News, he gave his best advice on manoeuvring around the tramlines:

Group bike rides will be set up around the area in the coming weeks so cyclists can get to terms with the new roads.

RideWise chief executive Gary Smerdon-White said: “We want to make sure that all cyclists feel safe and confident on their bike – especially when cycling along new tram lines and road infrastructure.

“These new Ridewise Cycling Safety Packs provide cyclists of all ages and experience with advice and support to help them feel more confident whilst they’re cycling in the area.”