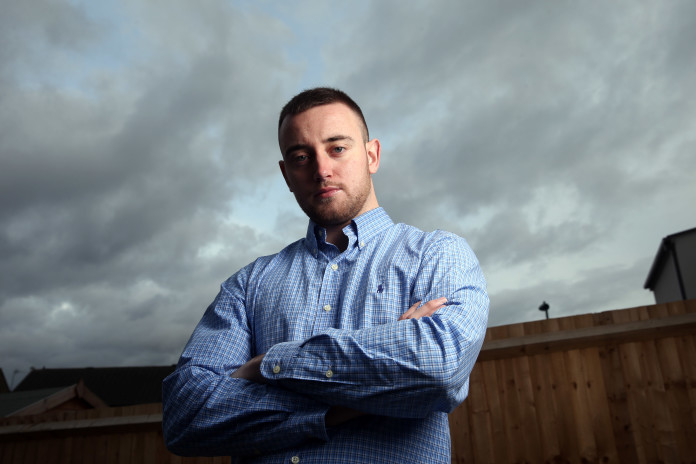 Nottingham’s Jacob Dunne, who killed another young man with a single punch in a 2011 brawl, is now running a campaign to prevent youth violence and reform the justice system after coming face-to-face with his victim’s parents.

James Hodgkinson died after Jacob hit him outside Yates’s on Old Market Square. He admitted manslaughter and served 14 months of a 30-month jail sentence. The case made headlines across Britain after Jacob met James’s parents on his release and apologised to them. They have since backed his efforts to turn his life around and are supporting his campaign for change.

In the first of a three-part series of guest columns written for Notts TV, Jacob, now studying criminology at Nottingham Trent University, argues there will be many more similar deaths without radical change to how Britain educates children, views drinking and violence, and tries to reform criminals.

“You might be wondering what a convicted killer is doing writing a serious column.

But what happened to me, and the victim, could happen to you – or your son or daughter. And as things stand in society – it will happen again to many people.

And that’s not something I’m willing to accept.

Before I continue I’d like to make it clear that I have taken responsibility for what I did – and the person I blame is myself.

I’m also being supported in what I’m trying to say and do by James’s parents. Because if a few changes are made to the way we educate children, police the streets, and treat criminals – I know some of the social problems created by crime could be prevented.

The first surprise in this story is that it starts at my secondary school, when I was very young.

Nottingham Emmanuel in Wilford had only just opened when I started there.

Before that I’d gone to South Wilford Primary School. My mum wanted me to go there – she didn’t look down on anyone in the Meadows, where we lived, I think she just thought ‘if I can get my child in to a better school, then why not?’.

But it was at Emmanuel where I started testing boundaries.

By the time I was in year ten at about age 15 I was diagnosed with ADHD and dyslexia and I could just never concentrate in class. I didn’t have any sense of why I was in school, I didn’t feel like I knew what the purpose of going to school was.

“You go to get a good job”; that was like a cliché to me. It would never be made real.

It was just mandatory – you go there and have to do it but you don’t even get told why, so it almost becomes a chore.

So I ended up playing up.

There’s no real pressure on a primary school kid, then at secondary school there’s suddenly this emphasis on ‘you have to do well’ – no-one has a real conversation with you to explain that transition or what school is leading to.

Teachers would never really be challenging the behaviour properly – they would just remove kids from the class. The way people were disciplined didn’t address the causes of their behaviour, it just pushes them to one side.

It started off being a bit of a class clown situation to me; skiving classes and being chased by teachers around the school, to the point where at any given day I’d only be in one or two classes. I kind of became that person to everyone, even my peers.

You start to enjoy it and wind up the teachers. You are now well behind and you start to lose self-belief that you can achieve anything.

Then I got kicked out of school – and ended up at the King School, which was a private school and waived the fees so I could remain in education. It was the only place that would take me in, because I had so many needs and was a ‘bad kid’, no-one ever wanted to take me.

Then what do you do? You give up on school and hang around with other people who have given up on school.

And then you take to the streets.

Instead of going to school you go to the houses of your mates that don’t go to school and can get away with it. And by this point I’m going back to school – to sell weed to the other kids. You’d just doss about and play X-Box and gett into more trouble.

Whenever people say ‘what would have changed you at this point?’ I’m not sure what to say, it’s a hard question to answer. I wasn’t from a bad household.

I think deep down I wanted to do something with my life but I think I felt I was a bit of a dumb kid. I was put in to the lowest sets in school – because I was so far behind – not even necessarily because I was thick.

You would do anything to get by, by which I mean robbing, and you would get more interested in the party lifestyle at the weekends – and this is when I started drinking.

I quickly associated alcohol with violence. My friends and I would go out in to the streets – you would start fights, with anyone really, or rob people.

And then you are an aggressive young person with no self-belief. I had no faith in what many people think of as normal life.

I remember the first time I really hurt someone

I remember the first time I really hurt someone. We were walking down the street and these two lads said something and my mate hit one of them.

I thought ‘I’d better hit his mate’, then before I knew it we were both hitting these other lads.

It sounds weird now, but you felt better about yourself.

It was a buzz – does making someone feel scared of you make you feel better about yourself? You’ve got no prospects or qualifications – but you can make someone scared of you. Perhaps aggression was a way of hiding my own insecurities. This just goes on. Things escalated at, say, 18, and you can go out now in to town. But you’ve got this association with violence and drink – it was almost planned, if you went out and had a drink, you knew someone in the group was going to kick off – and you would have to get involved. It was a way of proving your loyalty to each other.

But then what happens is other kids from other areas who have had exactly the same process as you – you bump into them in town and you have borderline gang fights. Suddenly it all kicks off. And that’s how what was a group suddenly becomes a gang.

If you were in town the obvious question for the group when you saw other lads would be ‘where are they from?’.

But for me there wasn’t anyone in particular to go to war with – we’d get in to fights with grown men, maybe who thought they could talk down to us.

At the end of the day it’s all down to reputation – in most people’s eyes if you walked away you were the weaker man. You are constantly thinking about how you look in front of other people – and that’s how you exist.

My story isn’t exceptional or out of the ordinary, there are people my age that have been shot, seen people get shot, and have been selling drugs since they were ten.

For me – that night when I punched that person, it could have happened to any one of us. I was not a full-on gang member, I was an ordinary kid from the Meadows and there are lots of people that had a lot worse start to life than me – but the risk was already there.

I was going out every weekend – and there’s the belief you always have to stick up for your mates. The police are seen as the enemy – in some ways at first they had just replaced teachers as a symbol of authority.

Not many people in our group, including me, had a dad around. Is that a coincidence? I don’t know.

People who had gone on to get jobs and qualifications – I saw them as the lucky ones, they had done well. Sometimes I felt ashamed – I’d look at them at uni and think ‘I’ve not done very well for myself’. I felt like I couldn’t achieve anything at this point.

On the night everything changed I wasn’t even there when it started. I was in another bar when I got a phone call from a friend, who was outside Yates’s.

I was in a bar in St James’ Street, and someone rang me to say something was kicking off, when I got there people were in each other’s faces. I didn’t even think about asking what the row was about.

Thinking about it now, it’s just so stupid.

What went through my mind? It’s like I was the hotheaded one, thinking ‘that’s enough of the talk’.

In some people’s minds a fight on a night out is still seen as ‘just lads being lads’. It’s only until something goes wrong that it’s not ok.

He went straight down. I knew something bad had happened straight away. I just remember hitting him and seeing that he’d fallen unconscious.

I don’t know exactly what the intention was – but I know deep down it wasn’t to seriously hurt him.

I managed to get away. I ran off and went home – all the way from Old Market Square to The Meadows. And that was it. Or so I thought.

Read the second part of Jacob’s story on nottstv.com on Wednesday, April 27.