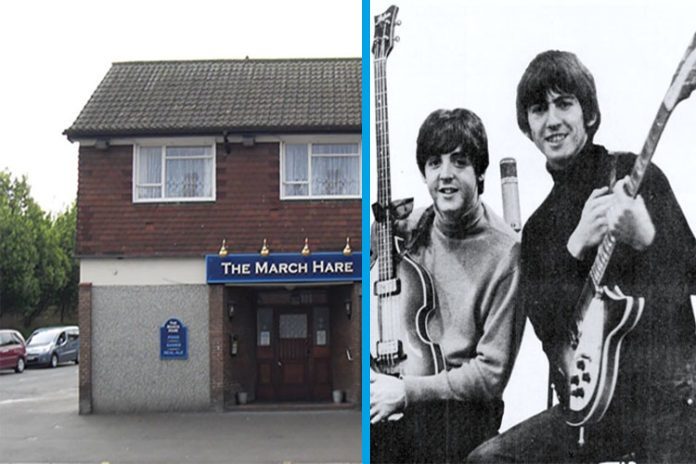 A Nottingham pub famous for narrowly missing out on hosting the Beatles has been awarded a special protected status as part of a real ale campaign.

The local branch of CAMRA chose nine pubs around Nottingham to become ‘assets of community value’ – including The March Hare, on Carlton Road.

A pub awarded the status is protected from being converted into a different business and is harder for big companies to buy and demolish.

A total of 18 other pubs have already previously been given the protection.

The Hare is one of nine announced today – and is known locally for its management once turning down a gig from the Beatles in 1958 – because they were deemed too expensive.

Owner and landlady Margaret Dove said she was pleased and surprised about receiving the status, approved by Nottingham City Council.

She said: “It is nice to receive this after all these years we have been here, I got a letter in the post saying we had been nominated but it is good to get the status.

My husband said no to the Beatles

“The regulars sometimes ask what they would do if we closed down, so now we have this status it will be harder to demolish the building which is really good news.”

The pub is known to some for turning down the Fab Four as they toured the UK while building their fame in the late 1950s.

Margaret added: “My late husband George said no to them playing here because they wanted £25 but he wanted to only give them £5 because he gave every band that amount.

“This was all before they were famous but we had a lot of press about it at the time and he was known as ‘the landlord who turned down the Beatles’.”

The pub instead hosted Engelbert Humperdinck, who also went on to become a world star.

Picture Gallery: Inside of The March Hare, one of the pubs awarded the status

Another pub nominated by CAMRA for the status was turned down – The Portland on Portland Street.

Nottingham City Council said the venue thought it paid ‘no important social and community function to the local community’, apart from being a pub.

City Council planning portfolio holder Councillor Jane Urquhart said: “Designating pubs as assets of community value recognises the important role they can play as community hubs and puts in a level of protection against them being lost to redevelopment or demolition.

“Not all pubs necessarily meet the criteria outlined by the Government to merit this special status, but I’m pleased we have been able to grant it in nine of these ten cases.”

Cheers for the memories: The chosen nine pubs

The protected status was enabled by The Localism Act 2011 which allows voluntary and community organisations to nominate premises which communities value.

The new status also means a pub’s sale after going on the market must be delayed for six weeks, to allow any community groups who are interested in buying it to register an interest and raise funds.

Community value pubs can no longer automatically be converted into shops and planning permission must be sought.